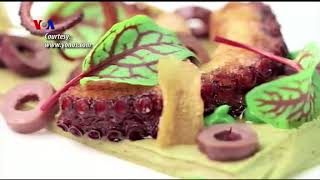 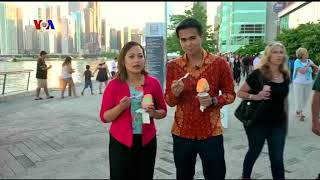 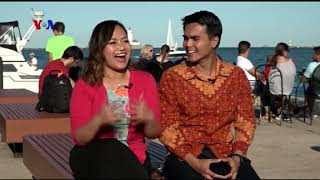 dailyherald.com - Hundreds of people from around the country converged on the Indonesian Diaspora National Convention. The expo was packed with several vendors showcasing the latest and greatest in products and services in the Indonesian culture.

The Remarkable Indonesia Fair hold an exhibition to reminisce the display of Javanese village during the Columbian Exposition 125 years ago. In this exhibition, the organizer showcased batik, the Indonesian textile. The Remarkable Indonesia Fair at Chicago had about more than 40 vendors selling various Indonesian products, ranging from dresses, accessories and jewelries, food and beverage products such as tea and coffee, cooking or baking ingredients, snack, candy and several other products.

Several tourism experts from Indonesia and a few from the U.S. provided the visitors with more information and detail about the Indonesia. They also highlighted numerous potential destinations for tourists, along with its wonderful nature islands, rich history, diverse culture and well preserved tropical forests. organizer displays all of Indonesia beauty and product and brought several opportunities to help and convenience to American people who already like invest in trade and tourism.

The event is also held as part of the yearlong bicentennial celebration in the State of Illinois. Illinois will turn 200 years old on Dec. 3, 2018, which marks the day the Land of Lincoln became the 21st state in the union and Indonesian delegates will be part of celebration.

Budi Bowoleksono, the ambassador of the Republic of Indonesia, played the drum and announced the convention and Remarkable Indonesia Fair 2018 has officially opened to everyone.

Budi Bowoleksono said during an interview with local newspaper, "The purpose of the event is to meet with fellow diaspora Indonesians and the convention is also providing a chance to promote tourism and Indonesian culture to our American friends".

Martino Tangkar, president of IDN-USA, said that "This event is aimed at exchanging ideas among Indonesian diaspora and the national stakeholders. This convention will foster friendships and cooperation between USA and Indonesia that will be beneficial to the USA and Indonesia".

Indonesia is a country in Southeast Asia and Australasia/Oceania. It is part of the Malay Archipelago. It has more than 18,000 islands. People live on about 6,000 of these islands. The biggest islands of Indonesia are Java, Bali, Borneo, Sulawesi, and Sumatra. The capital of Indonesia is Jakarta, on Java. The president now is Joko Widodo. Modern Indonesia began on Aug. 17, 1945.

Chicago and Indonesian native teen performers from CircEsteem and Yayasan Hidung Merah (Red Nose Foundation) performed at the Indonesian Diaspora National Convention in conjunction with the Remarkable Indonesia Fair. CircEsteem and RNF are two social circuses that aim to empower youth through the practice and performance of circus arts.

The guests and visitors from all social circles enjoyed the Indonesian foods accompanied by the excellent performance. Several artists also performed Several kinds of music by using the Indonesian musical instrument with the actors on the stage together. The last segment was a wonderful fashion extravaganza show displayed some of the Indonesia-themed fashion designers in the US base Indonesian.